The type of boat being developed dictates to a considerable extent what philosophy of design will work best. An America's Cup contender is not likely to benefit from the same design process as a production cruiser. Thus it is with us: our design philosophy developed along with our designs.

OUR KINDS OF BOATS 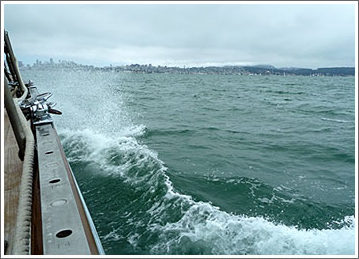 In an age where there are many different kinds of boats in some demand, but where many people also want the optimum in lightness and speed, we believe that there are also a significant number of people who want a beautiful, powerful, versatile boat – a more traditional boat – but it also must be:

Whether sail or power, that is the kind of boat that we want to develop. This is especially true of our racing designs to a proposed new version of the Universal Rule of Measurement, and of our truly fully classical motor yachts.

Would we necessarily, absolutely reject doing any other kind of work? No. But these modernized traditional boats are where we have focused our attention, and where we want to continue to focus our attention. It is that focus which most clearly and immediately sets us apart.

OUR BACKGROUND FOR THESE DESIGNS

The work of developing a boat like this begins with a familiarity with many examples of that traditional kind of boat. By growing up in the very end of that era, when a few of those boats were still in use and still prominent, one or two of our team already had that basic knowledge. We have worked and studied quite a lot to expand on it as well, studying the work of really great designers like Olin Stephens, Phil Rhodes, Starling Burgess, Walter McGinnis, Harold Lee, Charles E. Nicholson, Charles Mower, Frank Paine and others. We've also had to keep up with those modern advances in hull form and appendage form which can be applied to boats of that kind, and also develop our own.

More recently, we've followed with interest the concepts that the J-Class has applied to interiors. In the smaller boats that we are proposing, that vast level of luxurious accommodation is neither feasible nor desirable, but we could have a very high-quality, or possibly even elegant, interior in an M-boat or a large power cruiser. Good workmanship and a nicely appointed interior can still be incorporated in a smaller boat, such as the Q-boat.

In its simplest terms, the design of a boat can be approached in several ways (almost everyone uses some combination, of course, but different designers very much emphasizes one approach or another, as do we)...

As I said above, no one that I know of exclusively follows any one of these approaches; neither do we. But we do have a methodology which definitely emphasizes one approach, which we use because it works well for us.

We generally follow the method in the third bullet just above: working steadily forward so that we have a relatively constantly but very gradually improving design. This also gives us the advantage that we don't get badly "burned" by one misleading set of test data, or one error in interpreting it, as has happened to other (even outstanding and famous) designers. But we do periodically step out of our usual process and try some far-out concept, or at least some substantially different concept, to be sure we aren't overlooking something. Usually drastically different boats are also slow boats (there's a reason why any given kind of boat is shaped the way it is), but it can happen that something very different and very fast comes along, so we do periodically check for it. Mostly though, we try to work steadily forward, working the lines, the appendages (keel, rudder, winglets, etc.) and the sail plan, trying to improve each. We call this total approach "Semi-Systematic Design".

IT MATTERS HOW THE DESIGN ELEMENTS FIT TOGETHER

We periodically try things that we've previously tried without success. Why? It can happen that some trait of a possible design seems slow, but when tried with a different possible design, it's suddenly fast. The reason for this seems to be the fact that the boat is an integrated combination of its various shape components, so that one design needs a fuller entrance while another needs a finer entrance, or one boat needs more beam, while another needs less, etc. So there is a lot of good progress to be made by simply finding that best *combination* of elements for any given hull.

In general, we spend a lot of time on hulls that start off showing promise, doing at times many alterations or revisions to get as much performance as possible from that basically "good" boat. If a hull shows no initial promise, then we tend to just move on.

Obviously we would not do nearly as much of this development work for a casual cruiser as for a serious racer: the time and expense simply isn't warranted in terms of what the owner will get for his/her investment. But to a greater or lesser extent, as seems appropriate for a given design, this is how we like to proceed, this is the approach we believe in.